Anna Burnett and John Gimson lead in the Nacra 17 World Championships right after the American duo, Louisa Chafee and Riley Gibbs, were objected and penalized for a measurement infringement. 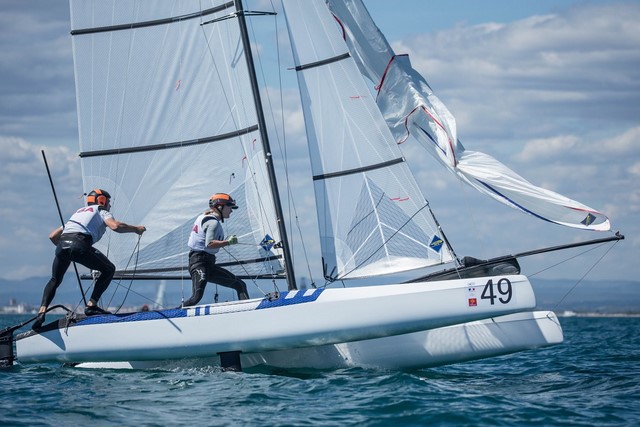 To answer the question now whether the younger generation can make leave an impression at these first ever event of foiling Nacra World Championships, 49er racer Gibbs and foiling kiteboarder, 21, combined with Rio Olympian Chafee, 25, had opened with two first places and an opening second from their group of 24 strong Blue fleets were credited with the interim early lead of the championship.

However, they were penalized for sailing along with bushes of rubber at the top of the foils removed, in contrast to the interpretation of International Jury measurement rules. The Americans, the training partners of Helena Scutt and Bora Gulari reported they had already trained with the removed bushes to save the maximum power in the head area instead of going for the performance gain where it to let the foil to drop lower.

USA coach David Howlett said, “Any performance gain is not the matter here, this is about the power on that head part of the board. To take the measurement like that, we had the boards and it was not for once, but twice, therefore we considered it was all fine.”

The young American pair has received the penalty of 50 per cent place for each of their races, Anna Burnett and John Gimson will now lead a team of British 1-2 at the World Championship standings top with Rio Olympians of New Zealand Jason Saunders and Gemma Jones in third.

Many key groups are working up in La Grande Motte and Lake Garda for example; the squad of five of the British Nacra 17 has been training together as a unit. They are training hard on their native Weymouth and Portland Olympic waters.